Features of the SDH line of microwave systems

SDH technology is not limited to use as a transmission medium, only the fiber-optic cable (FOC). Also, widespread use of radio for the organization of radio relay line SDH networks. Relay channels have great promise for replacing relay RDN systems, the possibility of more effective interaction with the existing SDH systems, optimization of networks SDH circuits in the complex for laying FOC areas of organization of alternative SDH signal transduction pathways and backup of the existing fiber-optic SDH lines.

Backbone SDH radio relay link until recently used the STM-1 level. When the need to ensure a large capacity used N STM-1 channels. In posledneevremya in connection with the adoption of new versions of the recommendations of the ITU-T G.7xx an opportunity to use the zero level of SDH - STM-0 (corresponding to the level SONET OC-1). It is no longer known as a new SDH levels, and as a special format of STM-RR synchronous transport module STM transmission rate from 51.840 Mbit / s, which can not be used on cable interfaces SDH network nodes.

Terminal station (OC), intended to enter the MRR multichannel signal on the transmission side and the signal separation on the receiving side.

Intermediate station is designed to receive signals from a previous station, amplify and transmit them towards the next station. The connection at the substation between the transmitter and receiver is carried out at an intermediate frequency, ie, without demodulating the signal in the receiver and no modulation at the transmitter 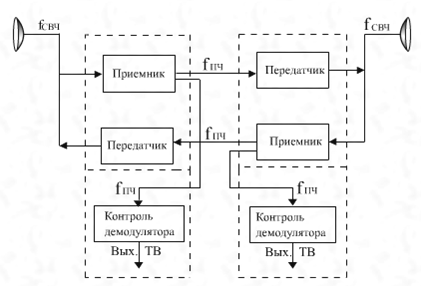 Nodal station are designed to extract part of the STA channels and the introduction of a corresponding number of new channels. From CSS often originate new MRR (branch line). The STA trunks on CSS produced demodulation signal from the reception and modulation by the transmission. 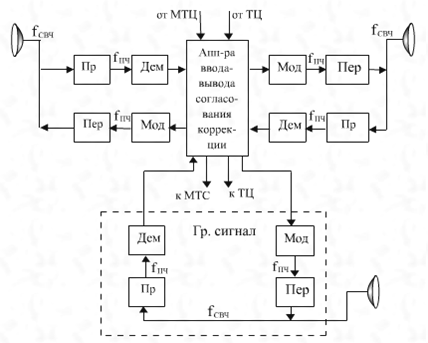 Two types of radio relay: line of sight and troposphere. 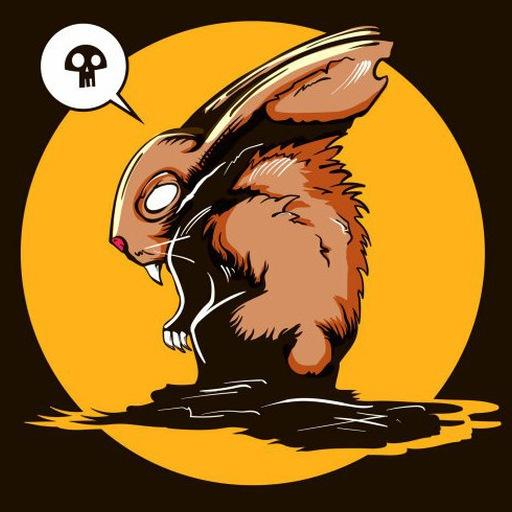