PDH technology was developed in the late 60s by AT & T to address the problem of large communication switches, telephone networks among themselves. Communication links the FDM, applied previously to solve this problem, have exhausted their opportunities in terms of organization of high-speed multi-channel communication over a single cable. The FDM technology for the simultaneous transmission of 12 user channels used twisted pair, and had to lay cables with a large number of pairs of wires or coaxial cables are more expensive to increase the communication speed.

Start of PDH technology was supposed to develop the T1 multiplexer, which allowed digitally multiplex, transmit and switch (permanently) voice traffic 24 subscribers. As subscribers continue to use conventional telephones, ie voice was in analog form, the T1 multiplexers themselves carried out the digitization of voice with a frequency of 8000 Hz and a voice coding method pulse code modulation. As a result, each subscriber channel forms a digital data stream of 64 kbit / s, T1 multiplexer provide the transmission of 1.544 Mbit / s.

T1 channels themselves were inflexible and too slow for transferring large amounts of data, so the idea of a large number of multiplexing T1 channels based on the velocity of the hierarchy has been implemented.

T-channel systems technology has been standardized by the American National Standards Institute (ANSI), and later - the international organization ITU-T, with the difference being that the European variant speeds hierarchy had the designation E-channels, as well as E1 channel is included not 24 elementary voice channels and 30 channels. Thus the initial data rate was 1.544 Mbit / s and 2.048 Mbit / s.

When data flow T1, a frame consists of 24 bytes, each of which relates to its channel and bit synchronization is also present.

The American version of the PDH frame

Byte user information consists of 7 bits used for the actual transmission of voice traffic, and the eighth bit is used for overhead information that is called a telephony signaling protocol. Therefore a user data rate is 56 kbit / s. Technique of application of the eighth bit for official purposes was called "theft" bit.

In the European version there is no mechanism of "theft" bits.

The European version of the PDH frame

Instead used for business purposes, and 16 zero-th time slots
0 - receiver used for synchronization purposes and transmitter
16 - used for service information

When multiplexing multiple user streams PDH multiplexers used a technique called bit-stuffing. This technique resorted to when the flow rate of the user is slightly less than the combined flow rate. As a result, periodically PDH multiplexer encounters a situation where it "lacks" bit to represent the combined stream to a particular user thread. In this case, the multiplexer is simply inserted into the combined stream is bit-insertion and notes this fact in the official bits combined frame. The lack of complete synchronicity of data streams by combining low-speed channels in high-speed, and gave the name of PDH technology ( "plesiochronous" means "nearly simultaneous"). 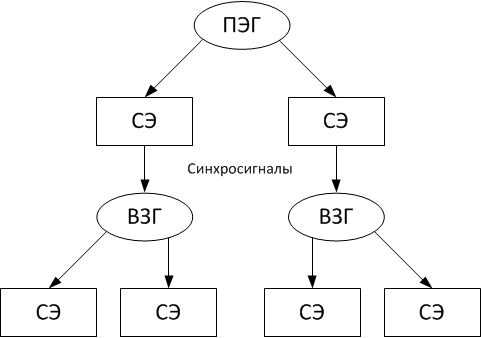 Each major network should have at least one primary reference generator (PEG) clock. This is a very accurate clock source, capable of generating clock signals with relative accuracy rate is not worse than 10-11 (such accuracy required standards ITU-T G.811 and ANSI T1.101). In practice, the use of PEG as a standalone nuclear (hydrogen or cesium) clocks or clock is synchronized by satellite systems in the exact world time, such as GPS or GLONASS. Typically, PEG accuracy reaches 10-13. The standard clock signal is a clock signal DS1 level, that is, the frequency of 2048 kHz for the international version of PDH standards and 1544 kHz for the American version of the standards.

The secondary oscillators are synchronized from the primary reference clock generators and transmit the underlying hierarchy clock sources.

In the American and European international PDH systems options present similar disadvantages to the complexity of the multiplexing and demultiplexing of data streams, as well as the IO data of the communication channels. And the use of bit-stuffing leads to the need for full frame demultiplexing united data channel. At the same time it built a large garland of multiplexers, demultiplexers, which are significantly increase the cost of construction and operation of communication lines, built on the PDH system. 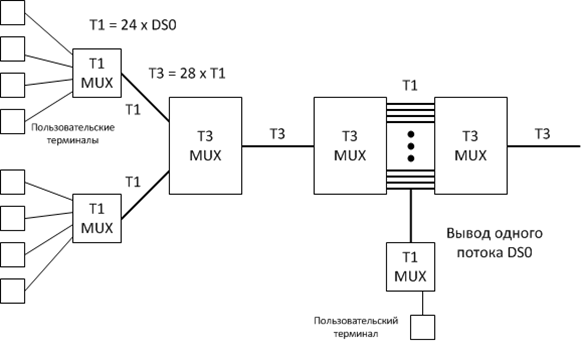 Also in PDH networks provided by means of providing network administration and its resiliency. Also, to date, this technology has a very low data rate.

Therefore, this technology is dying and is studied as a historical technology, which laid the beginning of the development of synchronous data networks.