Let's say that you make an application that will be displayed the elements of the network infrastructure on the graphic scene . The question is how to make the movement of these elements with the mouse, you have to implement drag and drop elements. In other words, take the item with the mouse and exercise his moving to another place graphic scene.

To illustrate an example of creating a new project and add the new class, inherited from QGraphicsItem .

To transfer data in Qt uses signals and slots system, but this does not mean that you can not use the old proven method, namely the use CallBack functions. The fact that the use CallBack function is somewhat fast option than signals and slots. And also can be easier to use with regard to the fact that it is desirable to disconnect signals from the slots when an object sends a program signal is destroyed and is no longer used. This point is particularly relevant when one considers that, in C ++ there is no garbage collection, like Java or C# .

The principle of CallBack

The principle of CallBack

To use CallBack functions in a class that will have to return a result, you must declare a pointer to a function with the same signature as the function that will be used as a CallBack function. But to place the pointer on the function you want to use a class method to apply this pointer. That is, this method is passed a pointer to a function, which is set in the CallBack class pointer, which will return the result of its activities. At the same time in this class, this pointer is used as an ordinary function that will perform the action specified in the class from which this feature has been installed as a CallBack function in the current class.

For example, the class will be used, which draws a square on the graphic scene and Control keys W, A, S, D. When moving square should send data on their coordinates in the class that was created. That is, should call this class function as its CallBack function.

In this lesson, let us learn drawing with the mouse in Qt, based on the most primitive analogue Paint using QGraphicsScene . No adjustments or brush size, or palette, or special effects, and a red line, which we will draw the mouse. 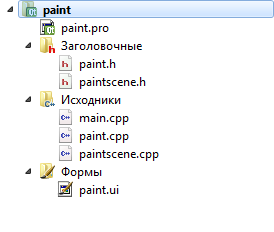 The structure of the project consists of the following files:

Few talk about the use of class QTimer in Qt. This is a small lightweight theme after a series of articles about QSqlTabelModel volume and the resulting consequences of it.

Timers we may need to create a poll LAN devices via TCP / IP stack with certain intervals or hourly data validation or active connections to the server. Yes to anything !? And here we come to the aid QTimer, which we consider the example of output every second time QLabel.

We use a minimum of files in our project:

A draw form in the Designer Qt Creator. But there is nothing to draw. QLabel thrown into the middle and ready.