In the process of transferring a GUI softiny with QWidgets on QML QDataWidgetMapper found no analogue for QML. This fact was somewhat spoiling the mood. But there was nothing, but to look for other ways to implement or make their full version of this, your Qml Data Mapper.

Nevertheless, searching on the web expanses yielded the results as an example in 2011 by Nokia developers to implement the SQL Widget Mapper for BlackBerry based on Cascades (framework for native development on QML Qt under BlackBerry, respectively). By evening meditation on the present example was able to saw through the code for the current QML Qt, which is quite nice to feel like when working under the Desktop, and when running under Android, (cross-platform no matter how how).

To demonstrate the QML Data Mapper will write an application that works with the SQLite database. Each time an application writes a few lines in a database, from which data are collected using a data model to inherit from QSqlQueryModel and displayed in QML TableView. The main window of the application there is a button, pressing that cause, which displays information on the first row of the table dialog. When you double-click on one of the rows in a table is also called a dialog box, but the information on this line. Also present button in the dialog box to scroll through the information from the table.

In addition to the more traditional Grid , Row , and Column , Qt Quick also provides a way to layout items using the concept of anchors . Each item can be thought of as having a set of 7 invisible "anchor lines": 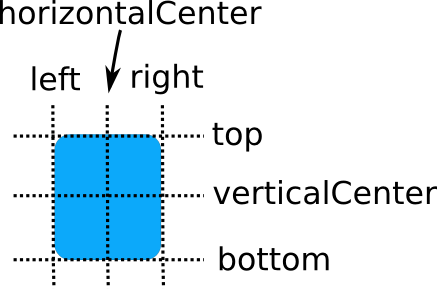 The baseline (not pictured above) corresponds to the imaginary line on which text would sit. For items with no text it is the same as top . 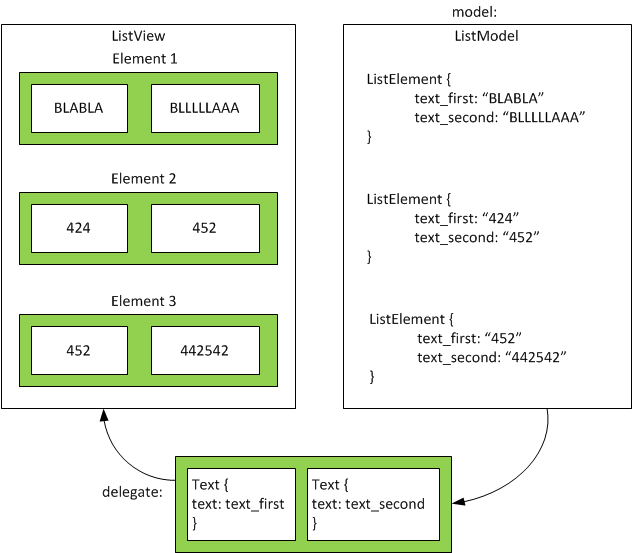 A short note, born out of the question of one of the regular readers of the site. When developing the application interface under QML for positioning objects in the GridLayout is necessary to use the functionality of embedded properties Layout. Such as:

To represent database tables in the development TableView using QML You can use a class inherited from QSqlQueryModel . To do this, in the inherited class to define a method that would establish the respective roles of the table columns to the corresponding columns in the TableView, defined in the QML , which also indicates the roles of each object TableViewColumn , that is, for each column. You will also need to override a method QVariant data(...) const , which returns the data for the table cells. In this case, the information will be returned in accordance with certain roles columns of the table.

The project structure to work with TableView

The project consists of the following files:

But in the case TabView this approach does not work, because the objects tabs added dynamically, so you need to access the tab on its index, pick up an object from the item and find it of interest to us a child object in this item also on the index. And then get access to the property of interest to us. It is also recommended to note that in this case, the code does not work completion QtCreator .

And most likely you will get an error as follows:

ReferenceError: 'something' is not defined

QML → QML - Lesson 008. How to work with system tray (QSystemTrayIcon)

When moving the application interface from Qt / C ++ to Qt / QML my hands reached and application icons in the system tray. The aim was to put an icon in the System Tray from C ++ to QML, partially or completely. The first option, which I realized, was a wrapper around QSystemTrayIcon with QMenu using a system of signals and slots . The solution is quite logical, given that in QML is not a facility, like MenuBar to System Tray. So we do a wrapper, which can interact in QML layer.

After the wrapper was implemented, I had the opportunity to consult with the programmer of Wargamming  - Constantine Lyashkevich , who recommended me to pay attention to what QML can have access not only to the signals and slots, and the parameters of the Q_PROPERTY , who also were in the class QSystemTrayIcon , that is, in fact it was only possible to register this class as the type layer in QML and try to write almost all the code on the QML. I checked the board and talked about by Constantine. As a result, he became interested in this problem and we spent the evening entertaining hour of attempts and jointly stuffed QSystemTrayIcon maximum in QML.

So in this article you will see two implementations to work with an icon in the system tray.

I have already told in the article about the creation of dynamic widgets to Qt , how to create and delete buttons dynamically, as well as how to interact with them. And there used Vertical Layout, a case we can use QML ListView Qml, both similarly used when programming in Java for Android. That, incidentally, is also applicable when programming in Qt for Android.

The article about the dynamic creation of widgets used for example QButton class objects. This article will use the objects Button Qml, which customization was discussed in the following article . But the key will be placed in the ListView Qml.

This time dispense project created by default and even without the designer interface. Especially because at the time of this writing, not all parameters can be set in the designer. A following project structure:

Recently, a subscriber asked me for help on the issue, the answer to which he was looking for on the Internet. I do not have much free time, but it seems the stars have converged so that time was the question from the category of those that have already had some experience. 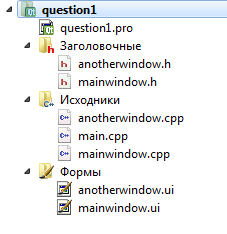 The project structure is characterized by the presence of an additional class of default, which would be responsible for the secondary window.

If we talk about Scalable interface, that is scalable interfaces for developing applications on Qt, this is the main problem is that you need to create an interface that will be read perfectly on all screens, whether computer screen or a smartphone screen.

Parameters of the GUI, such as the width and height are specified in pixels in Qt , but with the same screen resolution on your computer and on your phone (for example, 1366 x 768 pixels) get completely different results. On your computer, button size 40 by 60 pixels would be convenient, I would even say a large, and on the screen of the smartphone is already on it will be difficult to get a finger.

Therefore the development of a single application interface for multiple platforms and screens must be some way to solve the interface problem of scalability.

Qt/C++ - Tutorial 083. Creating a dynamic library and connecting it to another project