FOTL - Tutorial 003. The attenuation in the optical fiber

Attenuation due to the absorption due to the losses on the dielectric polarization depends strongly on the properties of the fiber material and is calculated by the following formula:

The attenuation in the infrared region, situated in the wavelength range of more than 1.6 microns, calculated by the formula:

In the scattering of light at inhomogeneities rays diverge in directions of which has a smaller angle of incidence than the angle of total internal reflection. Some rays while leaving the core and go to the shell, and the other, remaining in it, come back to the radiation source. This scattering is present in any optical fiber; it is called Rayleigh scattering. Attenuation on the scattering can be estimated using the following formula: 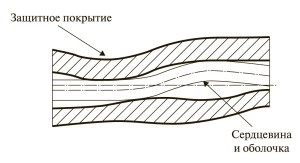 Loss may also arise by random microbends of the optical fiber, which occur during the blending of the protective coating and the manufacture of optical fibers as a result of thermal expansions and contractions directly and fiber coatings. Span deviations of less than 1 micron, and the step of - at least 1 mm. By Macrobends also includes optical fiber bend as a result of installation of cable lines or laying cable stocks in telecommunication cabinets when neglected recommended minimum optical cable bending radius.